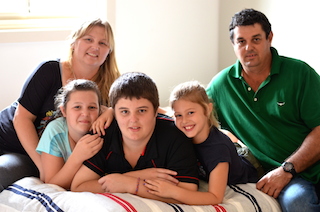 When James Chapman completes this year’s City-Bay Fun Run, the 16-year-old schoolboy who has spent most of the past three years in hospital will share his victory with supporters Australia-wide.

Using Adam Internet’s social media-enabled City-Bay Race Hub, James will share a personalised video of the moment he crosses the finish line and his race statistics with family and friends through Twitter, Facebook and email.

On Sunday, September 21, James will take part in the City-Bay Fun Run in his wheelchair to show how much he has achieved since a motorbike accident left him a paraplegic at age 13.

James has spent nearly two of the past three years in Adelaide’s Women’s and Children’s Hospital, supported by his family from Quorn, 330km away, recovering from his injuries and learning to live with his condition.

Now, as the 2014 Team Adam ambassador, James will lead a team of 300 City-Bay Fun Run participants who aim to raise more than $15,000 for Ronald McDonald House, the “home away from home” for the Chapman family while he was in hospital. Team Adam is a fundraising initiative by staff, friends and customers of Adam Internet who want to give back to the community.

James’ mother and father, Dani and Corey, and sisters Jaquarra and Mackenzie will join him on the City-Bay Fun Run.

James said taking part in the 2014 City-Bay Fun Run was a great opportunity to give back to his family’s "home away from home", Ronald McDonald House.  “For me, doing the City-Bay Fun Run is to prove to myself that I can do anything I put my mind too,” he said  “Realising no matter how bad things get, you can still keep living and chasing your dreams. It's not always as bad as it seems. I hope others can see this too.”

More than 3000 families have stayed at Ronald McDonald House since it opened in January 2000, providing vital support for children in long-term stays at hospital. Since a 10-apartment facility doubled accommodation capacity in 2011, Adam Internet has sponsored Ronald McDonald House by providing free high-speed Internet access for both staff and families.

Last year, an early version of the system attracted 80,000 unique visitors - more than twice as many people as took part in the run!

Adam Internet is also offering aspiring City-Bay Fun Runners a 50 per cent discount on the $45 full cost of entry if they join Team Adam and commit to raising money for Ronald McDonald House through an Everyday Hero account. Learn more and register at www.adam.com.au/teamadam.

Ronald McDonald House Community Development and Relationship Manager Kristen Hardy said James was wonderful to take part in the City-Bay Fun Run. “James and his family have been part of the House during the past three years, so making this contribution is part of the healing process for him,” she said.

“Our continued partnership with Adam is very powerful. Internet is such a crucial aspect of the House because it allows our families to stay in touch with their people at home when they’re with us.

“The Adam Internet Race Hub is also a fabulous addition to the City-Bay Fun Run because it allows people to share the passion of their achievement with friends and family and, hopefully, encourage more participants next year.”

Adam Internet, part of the iiNet Group, provides high quality Internet services to the residents, businesses and government departments of South Australia. Our services go far beyond the standard broadband connection to include mobile broadband, VOIP services, Data Centre, Cloud and private networking solutions. With more than 25 years of experience, Adam Internet started from humble beginnings as a Bulletin Board Service to become recognised as one of the leading ISPs (Internet Service Provider) in Australia.